don't waste your worry on me, i come and go as i please, always find what i need: i got my skeleton key. 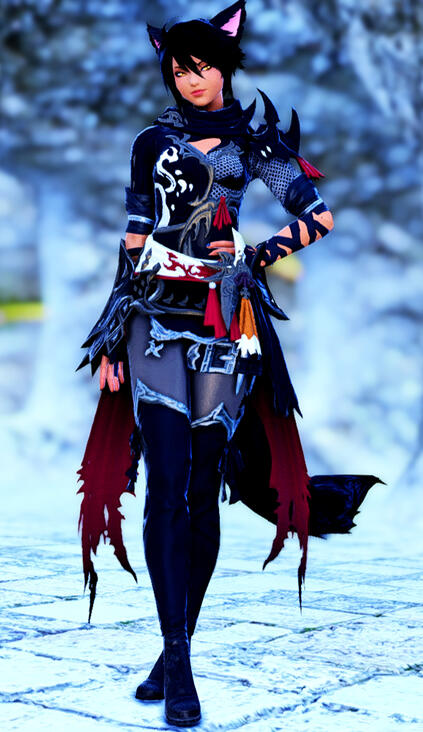 hair/fur - black and fluffy! tail fur is longer and fluffier than the average miqo'te, likely because of xaela genes.
eyes - golden, with thin and dim gold limbal rings.
height - 5'2".
physicality - l'enore can flip her presence on and off like a switch. on, and she has a casual sly, smirking confidence, holding her own in the social war that takes place in the taverns and streets that she frequents. off, and she can blend in anywhere she pleases, letting eyes and attention glide right off her as she goes about her business unbothered.

languages - fluent in eorzean, xaelic, & hingan; well-versed in rogues' cant. can speak doman conversationally, but not that great at reading it.

As sly and sneaky as the smattering of scales on her skin would have her seem, L'enore is a trickster and a woman of mystery through and through. constantly hiding herself behind a mask of playful sass and quick wit, she can come off by turns a street-savvy, friendly type with a penchant for sarcasm; or a total frigid bitch whose insults cut as deeply as her daggers. this makes getting close to her an act of incredible patience and determination- likely just how she wants it. after all, letting people in would mean having to give up her secrets, and a thief knows full well how tightly she must cling to whatever she considers 'hers'.

♠ CAT BURGLAR! - An agile and skilled thief, L'enore makes her living by profiting off the greed of others. A rare weapon? A priceless artifact? Cold hard gil? She'll snag it in style and deliver it right to your doorstep- provided that you can pay her fees, of course. but rest assured: you're getting what you pay for. She's so good at her job that she's earned the title Skeleton Key in certain underground circles.

♠ family matters! - l'enore's parents are both infamous in their own right: her father is arhien kha, a high ranking mob boss of the hingan yakuza, well known for his mercurial nature and skill with a katana. her mother, l'bhella jhasi, is an ex-Sharlayan scholar, exiled from the island for 'numerous experiments and studies of a deeply dubious and upsetting nature'. it's not a stretch to see where l'enore gets her sparkling sense of morality from, but also easy to see that she has a LOT of ancestral weight on her shoulders.

♠ baka mitai! - speaking of the yakuza... this thief is not free from ties to the hingan criminal network, thanks in no small part to her father's influence. she has faded in and out of the network's reach over the years, before recently choosing to strike out on her own and make her own path through eorzea. she hasn't cut ties by any means, so she could likely be pulled back in given the right circumstances.

♠ loyal blades! l'enore's daggers, seethe and sigh, may draw interested parties purely by their more unusual properties. in their owner's hands, they manifest powerful fire and light aether in the form of red and gold butterflies. deadly as they are beautiful- do their origins intrigue you?

Hello! Thank you for checking out L'enore's carrd.
I'm Alice [she/they], an old coot (25+) who's been RPing for over 15 of those years over MMOs and forums of all kinds. However, I never stop getting excited about forming new friendships, both IC and OOC, so please feel free to reach out!
It's usually easiest to reach me on Discord, at Alice#7156, but feel free to shoot me a tell in-game if I'm not AFK!

My timezone is PST/PDT; I mostly work during the day and afternoon, with my evenings free!
I prefer RP in-game, but I don't mind short scenes over Discord either.
Please note that I'm not really interested in RPing with anybody under 18. This is not a matter of content, but of maturity! Thanks for understanding!

I do not RP dubcon, noncon, gratuitous torture, or random one-off ERP under any circumstances. Character injury (or anything that would cause significant changes) needs confirmation beforehand.
I am fine with both dice-based and freestyle combat, as long as there's no godmodding, metagaming, or other uncool bullshittery involved. Please give me and my character the same respect that I do you and yours. 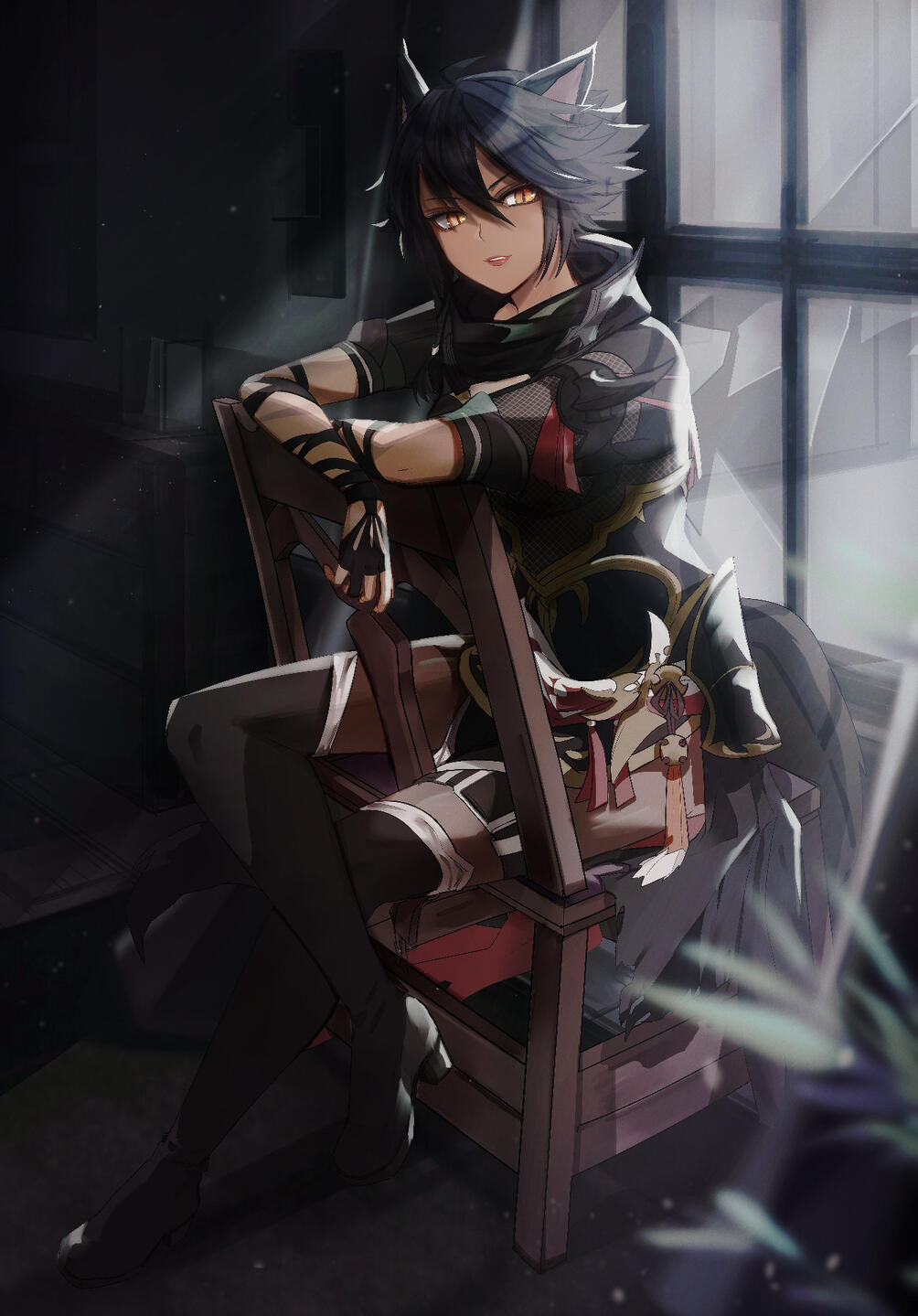 despite what most assume, l'enore's father was a good one by most standards. he loved his first and only daughter with the same intensity that he approached anything else in his life, and woe betide anyone or anything that threatened his little girl's quality of life. however, for as much as he spoiled his child and let her want for nothing, he also firmly and stubbornly guided her towards his path of choice: to take over 'the family business' and join the yakuza when she grew up.
in this regard, she disappointed him, and despite his attempts to soften his frustration in her choices and respect her independence, there yet remains a strong current of tension between them that has frayed a once seemingly indestructible father-daughter bond.

a brilliant and incisive woman, l'bhella worked hard to stoke the fires of a curious flame within her child. though she gladly passed down the ancestral arts of red magic to l'enore, she also allowed the girl to sit in on her various experiments, and constantly quizzed her on everything she saw, heard, or did- imparting that a keen eye and a keener mind can solve almost any woe that one gets themselves into.
yet l'bhella was far from a perfect mother. emotionally distant, seated firmly in logical reasoning, yet incredibly paranoid of anyone and everyone, even l'enore's burgeoning childhood friendships. perfectionistic to an extreme, accepting no faults or mistakes, and expecting only an unobtainable future from her daughter. l'enore cannot deny that her mother truly loves her, but after numerous clashes of personality, she has drifted far from her mother's eye, for her own sanity.

after doing some 'property relocation' on the behalf of one of selene's employees, l'enore found herself more or less having friendship foisted upon her, whether she liked it or not. though she fights hard to keep her distance, selene's keen eyes seem to peer right through her air of mystery every time; l'enore isn't one hundred percent sure whether she actually dislikes it or not.